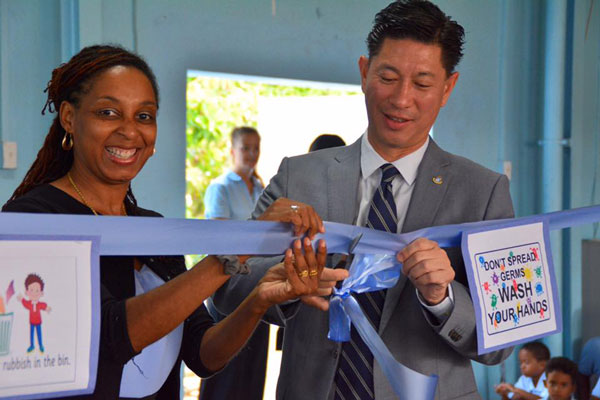 The Minister of Ministry VSA Emil Lee, was also present to address the students about the importance of personal hygiene.

Minister Lee commended the organizers and school for organizing the event. He explained, "As Minister of Health, my job is to make sure that the population of St Maarten is as healthy as possible, and one of the simplest ways is to be clean.

“That means washing your hands and to keep your neighborhood clean".

Each student was asked to go home and help prevent the breeding of mosquitos by making sure there was no sitting water or garbage in their yard.

The Washing Hands Hygiene Week is being held from May 17 – 20, and is an initiative of the Parent Teacher Association (PTA) of the Simpson Bay School.

The PTA wanted to emphasize the importance of personal hygiene of students and staff, especially on washing hands and dentistry.

Washing hands with soap and water at critical times, especially before eating or preparing food and after using the toilet, can prevent nearly half of all deaths related to diarrhea and almost one-fourth of death from acute respiratory diseases.

The Region of the Americas set a new Guinness World Record in 2011 for the most people washing their hands simultaneously in multiple locations.

Representatives from Guinness certified that on 14 October, 740,870 people washed their hands simultaneously in different locations in the Americas.

Hand washing is one of the most cost-effective public health interventions for preventing the spread of infectious illnesses.

Each year, about 3.5 million children die before their 5th birthday due to preventable diseases, mainly diarrhea and acute respiratory diseases, according to the Pan American Health Organization (PAHO).

According to survey data from the Global School-based Student Health Survey (GSHS), over 15% of schoolchildren in some countries say they rarely or never wash their hands before eating.