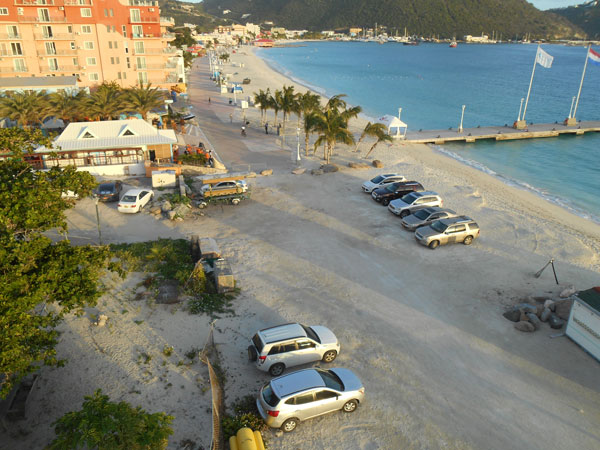 PHILIPSBURG:--- The St. Maarten Nature Foundation is concerned of increased parking and driving on Great Bay Beach, particularly during turtle nesting season. The vibrations of cars and cars parked on beach areas are a serious threat to nesting sea turtles, their nests and hatchlings once they emerge out of their nests. Of particular concern is the mount of cars and driving which occurs on the beach in the vicinity of the Sea Palace Hotel close to the Walter Plantz Square.

Sea turtle population numbers have plummeted to dangerously low numbers throughout the past century due to human impacts, bringing many species close to extinction, causing them to be listed as critically endangered. In order to reverse this trend, all sea turtle species are now protected by international laws and treaties as well as local laws. Based on ARTICLE 16 and 17 of the Nature Conservation Ordinance St. Maarten it is illegal to kill, wound, capture, pick-up, have animals that belong to a protected animal species, to directly or indirectly disturb their environment resulting in a physical threat or damage to the fauna or to commit other acts which result in disturbance of the animal. It is also forbidden to upset an animal belonging to a protected species, to disturb, damage or destroy its nest, lair, or breeding place, as well as to take the nest of such an animal. Also, it is forbidden to pick-up or to destroy the eggs of animals belonging to a protected species.

The Nature Foundation understands that various complaints were filed against cars driving and parking on the beach and requests that stakeholders and decision-makers take these complaints seriously.