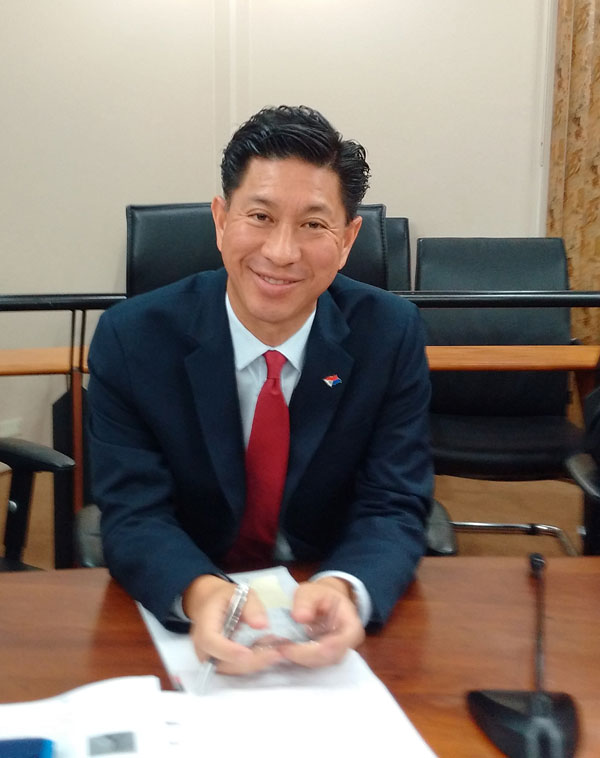 PHILIPSBURG:--- The Minister of Health Emil Lee announced on Wednesday at the Council of Ministers press briefing that there have been eight confirmed cases of Zika on the Dutch side of the island, 61 cases on the French side and 707 cases in Puerto Rico. Minister Lee said it’s clear that the virus is spreading throughout the region, while there is some level of presence on St. Maarten/St. Martin.
He said the Ovitraps that were distributed to various residents in the Fort Willem area worked well when it was properly used but there are cases where the ovitraps did not work optimally since the persons that had them did not know how to use them. Minister Lee said the traps were distributed as CPS was conducting its testing phases which they recently completed.
The Minister of Health said there is more that have to be done to decrease the breeding grounds of mosquitos. He said his Ministry is busy trying to hire someone to conduct vector specialist to map out the areas. The Minister said is Ministry is also looking into ways on how they could work closer with Curacao and Aruba.

Government continues the fight against mosquitos

“Government continues the fight , but the only way that we will win the war against mosquitos, is if the population is well informed and engaged” said Minister Lee during the Council of Ministers Press briefing on Wednesday.

It is as known fact that the Zika virus is spreading throughout the region, and there is some level of presence in St. Maarten. Currently, the Dutch side has 8 confirmed cases, and the French side 61 cases. Puerto Rico reports a whopping 707 cases of the Zika Virus.

The Ministry of Public Health Social Development & Labor has just concluded a field trial of a lethal ovitrap system which was deployed in the Fort Willem area. Lethal ovitraps use the egg laying urge of the female mosquito by providing a breeding site that kills the adult mosquito, and all of the eggs.

During the briefing on Wednesday, Minister Lee shared the results of the trial. He stated that when the ovitraps were installed and maintained properly, it was effective. Control traps in the area in some cases, showed a complete elimination of the aedes agypti mosquito which carries the virus.

However, throughout the field trial, we found that many people did not eliminate other mosquito breeding places around their homes. “There is no point in installing ovitraps if, there are other breeding sites right next to them” stressed the Minister.

“This is not a war that can be won quickly. Currently the ministry is hiring a vector control specialist to make a plan for the entire island. This will also involve close cooperation with the French side as well. We are also working together with Curacao and Aruba on ideas to help solve this issue” concluded Minister Lee.