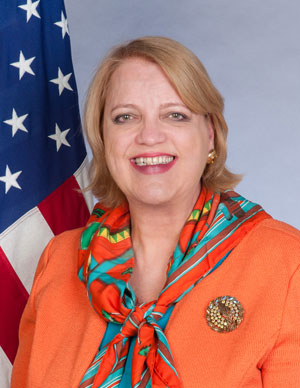 WILLEMSTAD:--- The United States Consulate General in Curacao is pleased to announce the appointment of Ms. Margaret Hawthorne as the U.S. Consul General to Curacao and Chief of Mission to Aruba, Bonaire, Curacao, Saba, Sint Eustatius, and Sint Maarten.

Margaret Hawthorne, a career member of the U.S. Foreign Service with 25 years of experience as a U.S. diplomat, assumed her duties as Principal Officer of the U.S. Consulate General in Curacao and U.S. Chief of Mission to the Dutch Caribbean in April 2016.

Ms. Hawthorne previously served as the Director of the Crisis Management Training Division at the Foreign Service Institute in Washington, DC. Prior to that, she was the Deputy Chief of Mission at the U.S. Embassy in Belmopan, Belize from 2011-2014, with ten months as the Chargé d’Affaires.

Other overseas assignments include head of the Political External unit at the U.S. Embassy in Moscow, Russia from 2007-2009, positions in Madrid, Spain; Santo Domingo, Dominican Republic; and the U.S. Mission to the UN in New York. In Washington, D.C., her assignments have included the NATO affairs office, Chief of Staff to the Assistant Secretary for European Affairs, Senior France Desk Officer, and Director of Regional Affairs in the Office of the Coordinator for Counterterrorism.

From 2009-2010, she was a Pearson Fellow on the House Foreign Affairs Committee in the U.S. Congress, and she is a 2011 graduate of the Industrial College of the Armed Forces (ICAF) at National Defense University. Ms. Hawthorne has received the State Department’s Superior and Meritorious Honor Awards.

Prior to joining the Foreign Service, Ms. Hawthorne was an attorney in Washington, D.C., specializing in civil litigation. A native of Chicago, Illinois, she holds a J.D. from George Washington University, an M.A. in International Relations from the University of Chicago, an M.

Sc. in National Security and Resource Strategy from ICAF, and a B.A. from Denison
University. She speaks Spanish, Russian, and French.

On behalf of all the staff here at the U.S. Consulate, we wish Consul General Hawthorne a warm welcome.