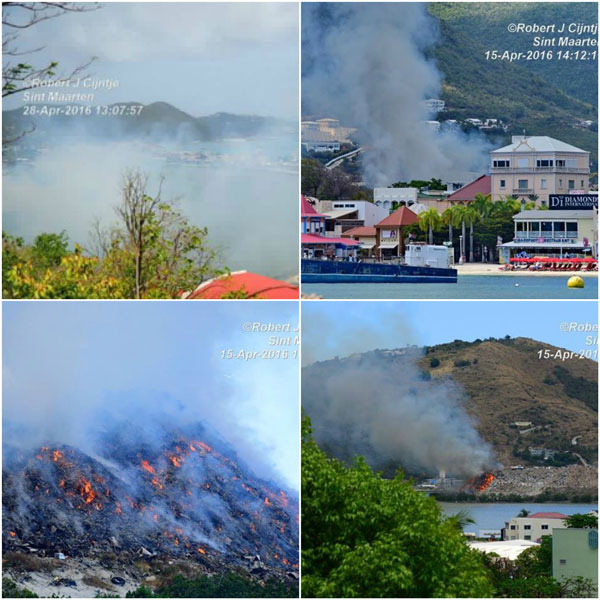 PHILIPSBURG:--- The Sint Maarten Nature Foundation is deeply concerned about the human health and environmental effects of the ongoing fires at the Philipsburg Landfill. For almost two weeks there have been constant fires at the landfill causing various districts to be covered and engulfed in toxic fumes. The Foundation has also started to collect information from the various districts on the health effects of the smoke associated with the landfill fires and encourages the population to take the brief, four question survey at https://www.surveymonkey.com/r/SWQXRKC.

“On Thursday the 28th of April there was again a large fire at the Philipsburg Landfill which are more likely than not caused by spontaneous combustion as a result of decomposing material at the landfill, particularly different forms of garbage which is not separated and stored with flammable material”, stated a Nature Foundation Press Release.

“Of particular concern are arsenic, lead, cadmium, and copper because of the human health effects. Particularly lead, arsenic and copper can be quite toxic to humans and have been shown to cause some forms of cancer.

According to the US National Institutes of Health the main threats to human health from heavy metals and dioxins, both found in the smoke released from the landfills, are associated with exposure to lead, cadmium, mercury and arsenic. For example, Cadmium compounds are currently mainly used in re-chargeable nickel-cadmium batteries and have been shown to have cancer-causing agents. Similarly Arsenic, chromium and lead have also been shown to have compounds that may result in cancer or organ poisoning to those exposed to the heavy metal.

These same chemicals are released into the atmosphere through either smoke or through falling fine ash and therefore pose a significant health risk to the community. Landfill fires also release high levels of Carbon Monoxide (CO) into the atmosphere which causes additional health effects through depriving the body of oxygen.

“This is a very serious health hazard and is affecting the communities very negatively. We have built an online survey at https://www.surveymonkey.com/r/SWQXRKC asking people if their health has been affected by the smoke so that we can communicate these results concretely to our decision-makers. We are also urging the community to sign the petition which has been circulating in the community http://www.ipetitions.com/petition/the-dump-problem urging decision makers to act swiftly in addressing not only the landfill fires but also waste management in general. These fires constantly pose a threat to the health and well-being of our communities and nature on Sint Maarten and especially now, when the Great Bay area will be very busy with revellers for Carnival, we are concerned about the effects these fires are having,” commented Nature Foundation Manager Tadzio Bervoets.