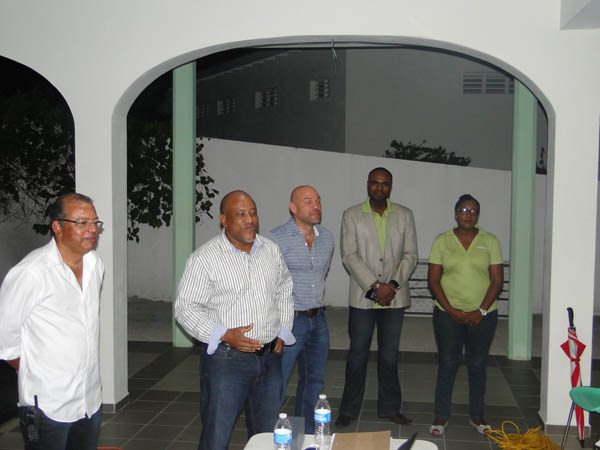 PHILIPSBURG:---- Interpol St. Maarten as part of the St Maarten Police Force, in cooperation with the St. Maarten office of the Attorney General Mr. Taco Stein, made 2 arrests on Friday June 5th 2015 around 03.50 p.m. in the area of Cole Bay.
On request of the Department of Justice in Miami USA, two British citizens were arrested in a case of involuntary manslaughter and false official statements, committed in the period of 2011/2012.
The arrested suspects are a 50 year old man with initials C.J and a 47 year old woman with the initials A.G. Investigations by members of Interpol St Maarten revealed that the 2 suspects were living and working on the Dutch side since the beginning of 2015.
Apparently after the fact, both suspects left the USA and could not be traced by US officials. As a result of this two red notices (international arrest warrants) were issued by Interpol Washington.
Interpol has 190 member countries. These member countries actively assist each other in global crime fighting. The red notice is one of the tools used by Interpol to track down, locate and arrest fugitives in criminal cases. Interpol St Maarten is investigating these notices on regular bases to be able to help the other member countries. Interpol St. Maarten states that St. Maarten is not a country were internationally wanted fugitives are able to hide and live a normal life. Interpol St. Maarten asks the general public for assistance in their work. Relevant information is welcome via the Tip Line 9300 or direct via 5422222.
Because the arrests were made on request of another foreign law enforcement agency, Interpol St. Maarten is not authorized to provide more information in this case at this moment in time.

On Saturday June 6th 2015 a follow up meeting was held by the Police Department (KPSM) represented by the Community Police Officer Felix Richards in partnership with NAGICO represented by Mrs. Lisa Brown and Mr. Terrence Dublin at Sint Dominic High School in Reward. This meeting was organized to once again bring the home owners and residents of Weymouth Hill and surrounding together to discuss the developments of that area after the first town hall meeting. Residents of Weymouth hill and surrounding during that time had become victims of numerous break-ins and home invasions and had come together to formalize plans how to combat the situation.
During this meeting the residents shared their experiences about coming together as a community, looking out for each other and taking the necessary precautions to prevent becoming a victim of a crime. They have also noticed a major decline in the amount break-ins, home invasions and criminal activity in their neighborhood and will continue to maintain this type of communication among each other.
Other town hall meetings in the different districts on the island are being planned by the other community officers and will soon take place.
Also present during this meeting were the Acting Chief of Police Commissioner Carl John, the Chief of police from Curacao Mr. Sambo who is on Sint Maarten on a working visit, Chief Inspector Rudolph Bloeiman (Head of Philipsburg police station) and Chief Inspector R. Henson (P.R.) (See pics attached.)

PUBLIC ANNOUNCEMENT (Community Bill board)
The police department is informing the general public and in particular the residents of the Sucker garden, Middle region, Mount William Hill, Dutch Quarter and Belvedere areas that the Community Police Officers for those areas namely inspectors Helen Romeo (588-2932) and Arcella Leonard (Cell: 588-4037) can be located from at the Police Sub-station located on Mount William Hill (Building of the Justice Academy) from Tuesday to Friday from 10.00 a.m. to 02.00 p.m.