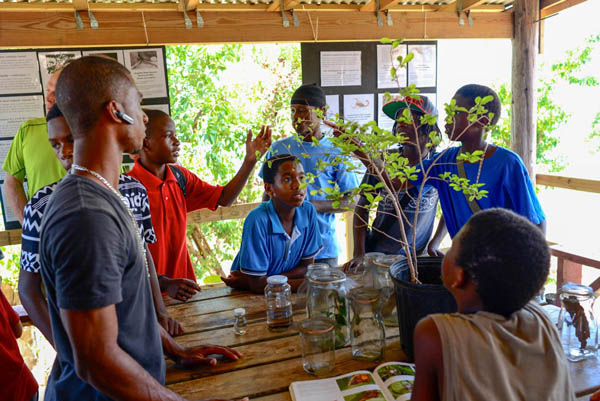 Cay Bay:---- The Les Fruits de Mer association's Endemic Animal Festival—now in its second year—was bigger and better than ever, attracting over 250 residents and tourists. The event celebrates the animals found only on St. Martin or only in our region and features a guided nature walk, an Endemic Animal Discovery Station, and other family-friendly activities related to endemic wildlife.

"We were absolutely thrilled with the great turnout and how excited the attendees were," said Les Fruits de Mer President Jenn Yerkes. "More than any other event we organize, the Endemic Animal Festival showcases the unique natural heritage of St. Martin, and it's really a joy to share that with people."

A clear highlight was the highly-anticipated launch of Club Gaïac with a Tree of Life Workshop at the event. The Gaïac, also known as Lignum Vitae, is an endangered native tree. Over 100 sprouted seeds were given away during the Endemic Animal Festival as part of an ongoing project to restore this heritage tree to the island's landscape.

Workshop participants were given a choice of seed origin and soil type and were encouraged to record their observations while they grow their seedlings. The information collected in this crowdsourced experiment will be used to develop best practices for successfully growing these trees. Although the once-common tree was over-harvested for centuries it grows readily from seed and is well-adapted to St. Martin, part of its native range. An interactive online map featuring Gaïac trees on St. Martin is also part of the Club Gaïac project.

This year's festival was held at the Discovery Farm and Garden at Seaside Nature Park. A variety of regionally-endemic birds were seen in the dry coastal forest of the park during the guided nature walk, including the Caribbean Elaenia, Bananaquit, Antillean Crested Hummingbird, Black-faced Grassquit and Lesser Antillean Bullfinch. A large Gaïac tree—perhaps one of the oldest living on St. Martin—was another highlight of the walk.

"There are so many fascinating stories embedded in the natural spaces on the island," remarked nature walk guide Mark Yokoyama, Les Fruits de Mer co-founder and author of The Incomplete Guide to the Wildlife of Saint Martin. "Biological histories—how unique species developed on St. Martin or why we share more fauna with some nearby islands than others—but also human stories, like the overexploitation of Gaïac or the introduction of the mongoose. There are different aspects to heritage, but it is all intertwined."

The Endemic Animal Discovery Station featured a variety of endemic lizards, insects and spiders including four species found only on St. Martin: the Spotted Woodslave, Bearded Anole, Soualiga Wall Crab Spider and Leaf Mimic Katydid. Attendees were also challenged to spot some highly-camouflaged local stick insects that were roaming free on a plant at the station.

The festival is produced and staffed entirely by volunteers from the non-profit association Les Fruits de Mer, with funding from sponsors Hotel L'Esplanade, Delta Petroleum, Island Water World and Le Petit Hotel. The event is part of the Caribbean Endemic Bird Festival, a regional wildlife awareness program that includes events in over 20 countries in the Caribbean. More information about the Endemic Animal Festival and Club Gaïac is available at http://www.lesfruitsdemer.com.