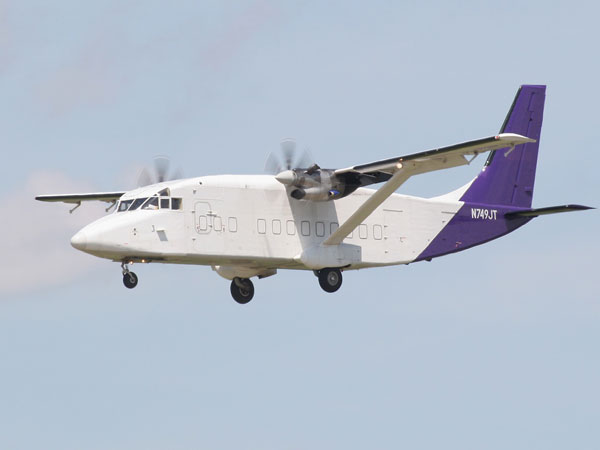 AIRPORT:--- A FEDEX cargo plane that took off from the Princess Juliana International Airport had to make an emergency landing about one mile off the coast of St. Maarten. According to information reaching SMN News the aircraft type is a SHORTS 360. SMN News further learnt that the cargo plane left St. Maarten on its way to San Juan, Puerto Rico. Reliable information reaching SMN News states that this aircraft makes a daily flight from St. Maarten to San Juan. The same aircraft lost brakes as well as power and ran off the runway at the Princess Juliana International Airport on Monday, sources said that the incident occurred not far from the SOL fuel farm.

So far it is not known if the two persons were rescued as no immediate information is available. According to information SMN News received the rescue operation is hindered due to bad weather conditions.

SMN News understands that the search and rescue team which includes the coast guard and marines stopped their search at 2 am Thursday morning. Further information states that a body was found.

Lourdes Sanchez, the girlfriend of the pilot identified the pilot as Eric Schnell (49). Sanchez said her boyfriend was expected to land in Puerto Rico at 7:30pm however she was contacted by Skyway who informed her of the incident involving her boyfriend. Sanchez further confirmed that her boyfriend was the pilot last Monday when he encountered severe problems with the aircraft that caused the incident on the runway at PJIAE. She said since then her boyfriend was very concerned about using the aircraft and yet he did because he did not want to lose his job. The woman was extremely emotional when she contacted SMN News Wednesday night, she said she was fearful of speaking out because she did not want her boyfriend to lose his job. Sanchez who was expecting that her boyfriend would have survived the crash confirmed to SMN News Thursday morning that she was contacted by the Coast Guard and Skyway around midnight and they informed her that the body of Eric Schnell was found with his passport on him while she was told that the co-pilot survived. Up to Thursday morning no information from the Coast Guard or the police has been released.

Frans Nieuwenhoven from the St. Maarten Sea Rescue said on Thursday that the moment they got information that a plane ditched at sea, they went out searching hoping to rescue the persons on board the aircraft. Nieuwenhoven said that the Sea Rescue, the  Dutch Carribbean Coast Guard, the Dutch Marines, some private vessels as well as citizens assisted with the search which ended at 2am Thursday morning because they had no more visibility and bad weather. He said that around 10 pm Wednesday night some debris and a body were found between Maho and Cupe Coy. The second person on the aircraft has not been found up to midday on Thursday. Nieuwenhoven said the search for the other victim and the aircraft continued during the day on Thursday. He further explained that the search and rescue stopped searching around 5pm Thursday afternoon because the second victim was not found neither did they find anymore debris at sea. So far the Public Prosecutors Office on St. Maarten have not made any statements pertaining to the crashed aircraft and the body that was recovered.

Skyway Airways accident off the coast of Sint Maarten.

SIMPSON BAY:--- On Wednesday, October 29th at 6:39 pm a Short SH36 aircraft operated by Skyway Airways departed from Princess Juliana International Airport en route to San Juan. Shortly after take-off, during the initial climb and at 200 feet of altitude, Juliana Tower lost contact with the aircraft and it could no longer be perceived on the radar.

Based on the information gathered we now know that the aircraft crashed into the waters just of the coast of Sint Maarten. Only two pilots were onboard the plane upon departure , the body of one pilot was recovered while the other pilot is still missing. The names of the pilots involved in the accident will be released pending proper identification. The Sint Maarten Civil Aviation Authority (SMCAA) investigation into the cause of the accident is in its preliminary stage and investigators from the National Transportation Safety Board (NTSB) and the Air Accidents Investigation Branch (AAIB) will be travelling to Sint Maarten to assist the department with the ongoing investigation.

The investigators from AAIB will all be arriving on Sint Maarten on October 31, 2014 to assist the SMCAA with the investigation into the cause of this crash. Please bear in mind that this can be a very lengthy process that can take some months before there are any definite answers on what caused this unfortunate accident. Additionally persons are advised that if you may encounter debris in the coastal waters, that they believe to be parts of the plane, please call the Sint Maarten Civil Aviation Authority (SMCAA) at 545 4226. Your cooperation in this investigation is very much appreciated.

Press Release by Ministry of Tourism (Department of Civil Aviation)