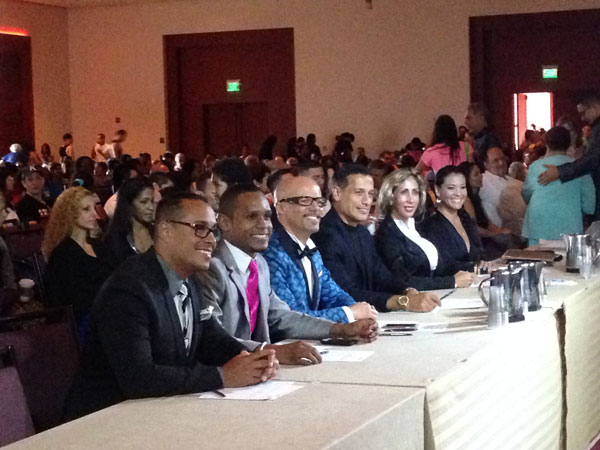 SAN JUAN, Puerto Rico:--- History was made at the World Salsa Open Final in Puerto Rico last weekend, when Sint Maarten representative, Paula Daal –Doño, was selected to be one of the judges for the main event: Finals Professional couples.
"This was the first time Sint Maarten was represented at this international competition. The fact that Sint Maarten was on the judges list for the main event means a big impact was made during the week of the competition. I have been going to Puerto Rico since 1999, you hardly see new faces judging the finals, it's very hard to qualify for this position based on the high standards the organizers set. It was an honor to be sitting next to 5 other judges which are world famous Salsa Stars. They included a judge from Italy, Panama, USA and two from Puerto Rico." Mrs Daal-Doño explains.
A total of 10 salsa professionals, which are certified and tested judges, were asked by the Salsa Open organization to Judge in this years competition. The competition consists of 9 categories and each category has three elimination rounds. Judges for the finals of the different categories are selected based on their performance during the whole competition.
"No one knows from before who judges which competition, not even the judges. The president of the competition informs the judges right before the competition starts. Then the announcer presents the judges and the countries they represent to the audience. The finals were watched online by an estimated 600,000 people, so this has been a great promotion for Sint Maarten. Its name is becoming more known to Salsa Lovers worldwide." Mrs Daal-Doño added.
The competition in Puerto Rico had 354 competitors, most of the competitors are winners from the national competition while the rest are from countries that don't have an accredited "Salsa Open" competition.
More than 4000 people came to take part in the event. Some of the countries represented include: Argentina, Australia, Brazil, Canary Islands, Colombia, Guadeloupe, Chile, Romania, Spain, France, French Guyana, Italy, Mexico, Portugal, Puerto Rico, India, Uruguay, Venezuela and more.
"I really want to thank The honorable Minister, Mrs Lourens Philips for her support and giving me the opportunity to represent Sint Maarten at this year's competition." Mrs Daal-Doño concluded.
If anyone is interested in watching a replay of the competition it is available on the website http://www.salseroboricua.net