Philipsburg:--- Five of the seven members of the Council of Ministers voted down a proposal presented by the Prime Minister of St. Maarten Sarah Wescot Williams during the Council of Ministers' meeting on Tuesday. Wescot Williams presented a motion to the council asking that the NA/DP/I-3 cabinet resign by the end of this week so that the Ministers that will form the third government of this governing period could take over. 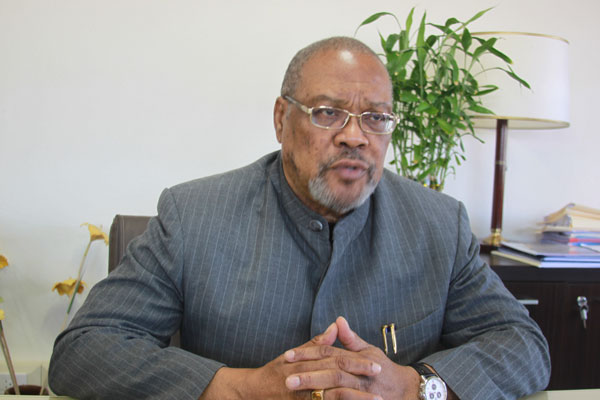 Due to the fact that Wescot Williams refused to deal with the agenda point presented by the National Alliance Ministers, on Tuesday an official letter was sent to Prime Minister Wescot Williams by the other five members of the Council of Ministers requesting that she call an official meeting to deal with the agenda point which is to dissolve the Parliament of St. Maarten. Prime Minister Wescot Williams has two days in which to call this meeting but since Thursday is a holiday then the meeting has to be called on Friday.

The Minister of Justice went as far as saying that it is time for the people of St. Maarten to speak out on whether or not they want new elections. He said he does not know what the Prime Minister and Leader of the Democratic Party is afraid of when it comes to having a new election. Duncan said that the two letters state that the Government no longer enjoys the support of Parliament which also includes her.

Prime Minister acts in Conflict of Interest when she voted twice on Justice Park --- Son and Son in Law are negotiating for Sameer Andrwos and American Company.

While a lot of attention is being placed on the Independent Members of Parliament especially Romain Laville and Patrick Illidge who is now under investigation for allegedly accepting a bribe and causing the fall of Government, it should be noted that the Democratic Party is playing a major role in the political instability on St. Maarten even though they only have two seats.

SMN News reported before that the two persons that are negotiating the Justice Park project with the Minister of Justice is the son of the Prime Minister, Andy Wescot and her son in law Gary Master. Minister of Justice Roland Duncan confirmed on Tuesday that he has been dealing with the two persons mentioned. Duncan said he will not make a judgment on the conflict of interest because he never dealt with her personally but he has been negotiating with her son Andy Wescot on behalf of Sameer Andrwos and her son in law on behalf of the Americans. It should be noted that article 35 of the country's constitution clearly stipulates when a Minister has to recuse his or herself from voting on projects or any matter that relates to Government. The Minister of Justice said that both Council of Ministers that the Prime Minister was part of voted in favor of the Justice Park and on both occasions Prime Minister Sarah Wescot Williams voted.

The main company that is offering financing for the Justice Park is WPK Carey and Company Limited who uses subsidiary companies to do business for them on St. Maarten. In the case of the Justice Park, the company Global 17 Limited is operating for WPK Carey and Company Limited. Minister Duncan said that Gary Master is representing these companies while Andy Wescot is representing Ourista N.V. which belongs to Sameer Andrawos.

Minister Duncan in explaining the Justice Park said that Ourista N.V. would have sold the BOX and the six story unfinished building that Andrawos owned in Cay Hill to Global 17 Limited for 25 million dollars and Global 17 would have completed and even built other buildings to lease to government for a period of 30 years after which the Government of St. Maarten owns these properties. He said that he has no signed document with these companies, the only thing he has is a letter of intent. He said that the project now stands at 85 million because he adjusted some parts of the project.

Heyliger ditched to Parliament to Avoid Screening --- Four Investigations against Heyliger could to hinder Heyliger from becoming Minister.

According to the rumors that have taken over St. Maarten, the Leader of the United Peoples Party Theodore Heyliger will not be a Minister in the third government, instead he will take up a seat in the Parliament of St. Maarten. For Heyliger to become a Member of Parliament it means one of the UP MPs would have to resign. Also based on rumors, it is said that MP Romaine Laville will be the next Minister of TEATT, if that is so then Laville would have to resign and he cannot appoint anyone to his seat in Parliament because the seat then goes back to the UP. The press release that was sent by the three factions on Monday said that the UP/DP and Independent Member Romain Laville is forming the new government which means that Laville becoming a Minister has been ruled out. Unless the negotiations are still ongoing and Laville will give the UP back their seat in exchange for the Ministerial seat after a decision has been taken on whether or not there will be a third government or if the call for new elections on St. Maarten will go ahead.

Another indication that could lead Heyliger to take a seat in Parliament and not in the Council of Ministers is that he risks failing the screening process because currently there are at least four investigations against Heyliger. Those four investigations are the famous Election Fraud Case that the Prosecutor's Office has for almost three years now, his involvement in the Bada Bing scandal, the complaint filed by Member of Parliament Romain Laville who claimed that Heyliger offered him a $350,000.00 bribe, and the guns that MP Patrick Illidge claimed that he bought from two UP Ministers. It should be noted that at least one person did not pass the screening process when the Democratic Party submitted his name to become the Minister of Plenipotentiary because that person was part of an ongoing investigation.

SMN News learnt from well placed sources that Member of Parliament Dr. Ruth Douglass will soon be leaving her seat in Parliament to take up a job in Curacao since she has been hired as the Director of the Adventist Health Institute in Curacao. Recently, MP Douglass has not been attending all the Parliamentary and Central Committee meetings because she has been focusing on placing her patients under other doctors. Should MP Douglass resign then the door is open for Heyliger to return to Parliament. SMN News tried to reach MP Douglass for a comment on this issue but she could not be reached.