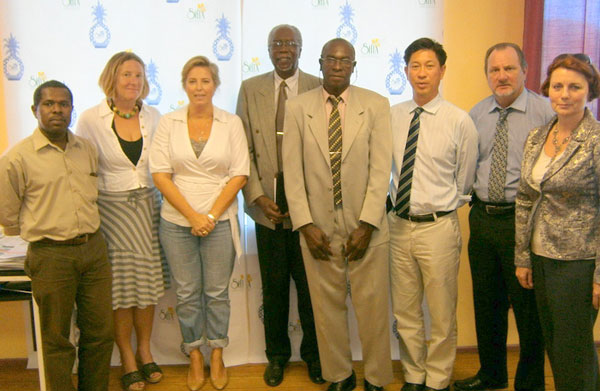 Philipsburg:--- The St. Maarten Hospitality and Trade Association (SHTA), the largest private business representative on the island, met on Tuesday April 2, 2013 with a delegation of the St. Martin Grassroots People Movement, led by its president and founder, Leopold James. The other members of the delegation were the board-member of the grassroots organization, Albert ('Jesse') Adams, and independent concerned citizen and observer, Mr. Freddy Richardson.
James explained that the term Grassroots St. Martin People Movement, is the colloquial name, indicating both the St. Martin Nation Building Movement (SNBF) and its ('French'-) counterpart, the Association L' Esprit de Concordia.

In his opening remarks, James clarified the metaphor "Bush-tea", representing the St. Martin Cultural heritage and its very embodiment - the native, indigenous St. Martin people.
"These are the very people, whose culture of hospitality was why the island got the brand name, the Friendly Island, which in return attracted hundreds of thousands of people and allowed for many businesses to flourish" James explained. He noted that, there have been numerous indications, that finally, there is a recognition, on various levels, that there can be no sustainable development on the island without "bush-tea", - meaningful input and participation from the indigenous people of St. Martin.
The Executive Board of the SHTA and the Grassroots SXM People Movement met to discuss common grounds. While both entities might have different starting-points based on their specific interests, they have many common concerns about issues the country is currently facing. The parties agreed to establish a structural setting for consultation, based on focusing on these common concerns and the betterment thereof.
Concerns were shared about transparency and electoral reform, the way in which decisions are being made by Government, the lack of stakeholder involvement in the various decisions and some of these decisions not being in the best interest of the people, the economy and the island as a whole. We all have a stake in St. Martin so we should all work towards a harmonious society, it is a process that may not always be easy, but it concerns the future of everybody. We have no right to saddle the next generation with the problems that we are reluctant to deal with.
James, thanked and commended the SHTA, in particular its president, Emil Lee for having the courage to invite his group in order to find common grounds and for creating the right conditions, conducive for developing a structural consultation format intended to bring parties together to that end.

The SHTA is dedicated to bringing quality to all aspects of life on St. Martin by promoting sustainable economic development for its members in cooperation with the social partners and the creation of a fair marketplace. For more information please contact our offices at 542-0108 or visit our website at www.shta.com.