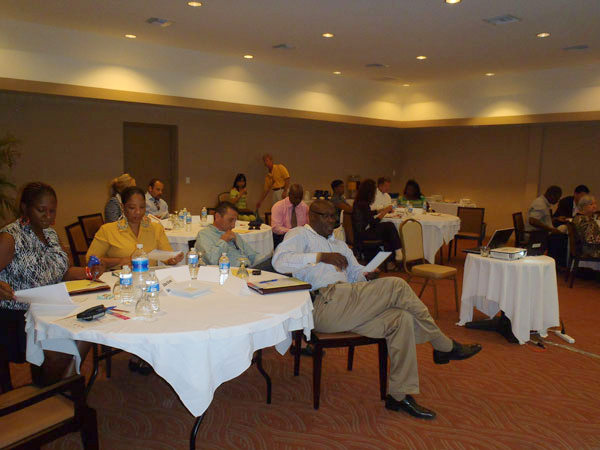 PHILIPSBURG:--- The St. Maarten Hospitality & Trade Association (SHTA) has announced the successful hosting of a recently held General Managers Retreat which was held on Friday 9th November at the Divi Little Bay Beach Resort under the theme "Energy, Economy and the future of Country St. Maarten."
The keynote address on Energy was given by Mrs. Loreto Duffy-Mayers who is the Project Manager of Caribbean Hotel Energy Efficiency Action CHENACT of Barbados. The main message according to SHTA that Duffy-Mayers brought to the GMs was, while green or alternative energy was indeed an attractive investment for the future, it was important that steps are taken now in order to mitigate energy waste as this can already see energy cost reductions of up to 50%.
She explained also that there is an urgent need for hotels to move away from the R22 Air-Conditions as they were too costly and not readily available any more. Her presentation also included a brief discussion on water conservation and preventative measures that can be taken to avoid waste. The opening remarks for the GM Retreat were given by SHTA President Emil Lee who thanked the SHTA Member hotels for attending and gave a brief "behind the scenes" explanation of some of the work that SHTA was busy with for the benefit of the island and its membership. He explained also the work SHTA had been doing with regards to bringing airlift to the island and the marketing initiatives it has undertaken in this regard. He said that the SHTA was strengthening itself as the Umbrella Association to include more businesses, which it could provide representation for.
Also in attendance was Policy advisor on Energy in VROMI Kendall Dupersoy who on the request of SHTA to Deputy Prime Minister William Marlin, minister in charge of VROMI, shared the Ministers vision for sustainable energy in the future for St. Maarten. In answer to questions raised by the GMs on whether there would be any incentives for businesses who invest in alternative energy coming from government Dupersoy confirmed that the Ministry of Finance was preparing a law to be introduced which will allow tax based incentives for investment in alternative energy. He said this was part of the plans to stimulate green and alternate energy and reduce the cost of energy on the island while at the same time making it more stable.
Paul Van Vliet, Director of PricewaterhouseCoopers also addressed the GMs on the work being done by the Tripartite Committee as it relates to the proposed new Labor laws of St. Maarten while SHTA Board Member and attorney at law for law firm VanEps Kunneman Vandoorne Peter van Dort gave brief remarks and fielded questions regarding the existing labor laws.
Executive Director for SHTA Alfred Harley also addressed the GMs and gave a brief overview of the Dollar-A-Day program managed by the SHTA office. He said that the SHTA had embarked on a strategy to improve on the program based on the request of many GMs from the different resorts that were DAD members. He also announced plans to expand the DAD program to include other businesses who wanted to contribute to the Social and Economic Development of the island.