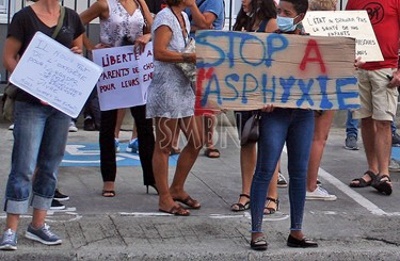 MARIGOT:--- On Friday morning about 350 parents that are part of the parents association gathered in front of the West Indies Mall in Marigot to continue their protests action against the use of masks for children from the ages of 6 years to 11 years old.
The parents feel that the government should allow parents to decide whether or not they want their children from ages 6 to 11 years old to wear masks at such a young age while attending school.
Despite the protests action which began earlier this week the parents have not won their case. The Collective wants to meet again with the vice-rector Michel Sanz, to ask him, in a constructive step, to use its prerogatives to improve the conditions of school-age children. However, the rectorat is not the competent authority to decide on measures that were imposed by the state through a decree.
Five representatives of the Collective were received on the premises of the rectorate in Saint-Martin, for an interview, which lasted nearly two hours. This meeting allowed a frank discussion, during which the Collective obtained from the rectorate, in particular, that it ensures the necessary benevolence of the teaching staff, mainly in the application of the decree aiming at the mandatory wearing of the mask to school.
Indeed, parents have referred to the Collective, threats of sanction against children who wear the mask badly during class or during recess. A note to school administrators and teachers will be sent by the rectorate, to recall this and show more patience towards children who encounter difficulties with wearing a mask, and not to have any stigma, threat, or punishment against these students.
The Collective has managed to get the rectorate to allow and encourage the implementation of school time arrangements, to offer children more breathing time, with staggered recess, or even an increase in the frequency of breaks.
The protesters obtained from Vice-Rector Michel Sanz, that he communicates more effectively with parents who do not wish to leave their children at school, during the period of application of the decree, and that he offers them specific support. With also the possibility of reintegrating the child into a school environment before the end of the year, if the wearing of a mask becomes no longer compulsory in elementary school
The Collective regrets, on the other hand, that no intermediate solution has been found, leaving no other choice than to have children wear the mask or to do "home instruction", with all the consequences that entail, no guarantee of being able to return to the same class before the end of the year, no guarantee of transfer to a higher class the following year, risk of the child being isolated, etc.
Thus, the request for the establishment of pedagogical continuity was rejected by the rectorate. However, this possibility remains possible for private schools not under contract and can be discussed with the head of the institution on a case-by-case basis. The vice-rector also specified that he could only act within the framework of the public or private school under contract.
If the Collective condemns, of course, the very rigid position of the State services, it nevertheless considers itself satisfied with this progress and will remain attentive to the implementation of the commitments made today, until the lifting of this obligation.
It is now established that the movement of the Collective for the free choice of wearing a mask for children aged 6 to 11 is useful and supported by a growing number of parents and concerned citizens.
The Collective claims to be only at the beginning of this fight for the well-being of children and the mobilization continues. New actions will be organized from next week. Details of upcoming actions will be sent over the weekend on social networks and in the press.