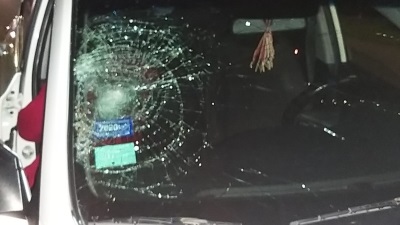 PHILIPSBURG:--- The police traffic department is presently investigating a traffic accident which took place on Monday, August 12th at approximately 07.25 p.m. on the Sucker garden road in the vicinity of Golden Barrel cactus drive also known as Becky Hill. This traffic accident involved a motor vehicle with license plate P-7524 en a pedestrian identified with initials C.Y. (45).
According to the report, the victim was walking down the hill toward Philipsburg while the motor vehicle was coming up the hill from the opposite direction. The victim suddenly lost his step and stumbled onto the street at which time he was struck by the vehicle that was passing by. The victim fell to the ground and suffered numerous scratches and bruising to his body and face, a laceration to his right hand and a broken right shoulder.
The victim was treated on the scene by paramedics and then taken to the Sint Maarten Medical Center for further treatment. At the medical center, the victim was treated and admitted to the hospital for observation and further treatment. The excessive use of alcohol also attributed to the cause of the accident.