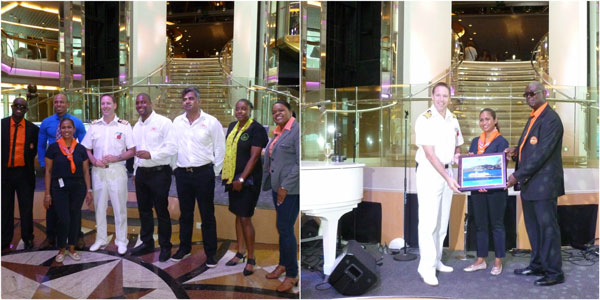 POINTE BLANCHE:---  The second new cruise vessel on its inaugural call for the month of November, Thomson Discovery (TUI Discovery), was welcomed on Thursday, November 10 by representatives of Port St. Maarten and other stakeholders.
Captain John Westgarth-Pratt thanked Port St. Maarten for its hospitality and cooperation during the welcome ceremony that included representatives from the St. Maarten Tourist Bureau, Dutch St. Maarten Taxi Association, Accessible Ventures and the ship’s agent S.E.L. Maduro & Sons.
Prior to arriving at Port St. Maarten, TUI Discovery had completed a six-day Trans-Atlantic crossing from Las Palmas, Grand Canary Islands before docking in Antigua a day before. The next port of call on Friday was St. Kitts.
TUI Discovery will be in the Caribbean Region for a six-month period and homeporting out of Barbados.
Ichel Moeslikan on behalf of Port St. Maarten Management, presented Captain John Westgarth-Pratt with a plaque and welcomed his passengers and crew to the destination. The vessel was in port with over 1800 British cruise passengers.
In the summer of 2016, Thomson Cruises (TUI) the Discovery, its newest and one of its biggest ships joined its fleet.
The Thomson Group is part of TUI UK & Ireland, the European cruise passenger is a significant market for the country.
Thomson Cruises employs approximately 18,000 people. The company started back up in 1965 with the aim of making foreign travel accessible to all in the United Kingdom of Great Britain.
Thomson Cruises has five ships in its fleet, namely, Thomson Majesty, Thomson Spirit, Thomson Celebration, Thomson Dream, and TUI Discovery. In the summer of 2017, the cruise line will receive its sixth ship, TUI Discovery 2.
TUI Discovery has a gross tonnage of 69,130; length of 264 meters; beam 32 meters; featuring 11 decks and can carry 1,830 passengers and 761 crew.
PHOTO CUTLINE: TUI Discovery Captain John Westgarth-Pratt receiving a plaque from Port St. Maarten Commercial Department representative Ichel Moeslikan as Dutch St. Maarten Taxi Association rep looks on.