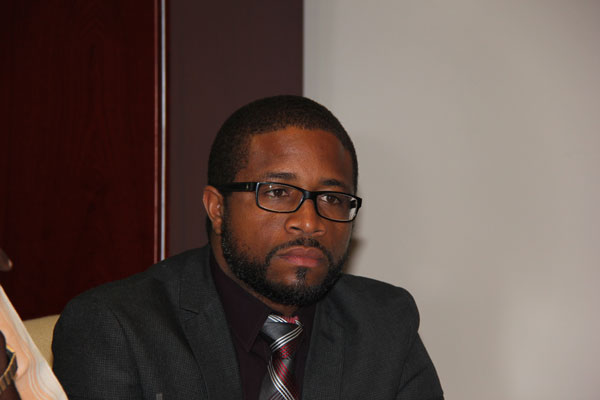 Philipsburg:--- Member of Parliament Romaine Laville tried very hard to convince reporters that the only reason he decided to go back to "his" party (the United People's Party) was because he wants to work for the people of St. Maarten and the NA/DP/I-3 Ministers are not working in the interest of St. Maarten and its people. Laville made a very passionate statement on Wednesday afternoon when he tried his best to convince members of the media that there was no financial gain in his decision. "I want to put some of the myths to rest, and what has been discussed in the media, on the blocks and in homes, and I want to make clear that there has not been any financial gain when I took the decision to pull my support from the NA/DP/I-3 coalition," said Laville on Wednesday.

In doing some research, SMN News found out a few things that Laville did during the one year period he gave his support to the coalition government. He said he was tired of knocking on the Ministers' doors and begging them to work and assist the St. Maarten people. A free breakfast program and free education were some of the things Laville said he wanted government to implement despite the budget cuts.

Laville claimed that the fallout from his party came when the former Minister of Economic Affairs refused to grant some of the Pelican workers taxis and bus licenses because some of these workers were his friends and supporters.

SMN News learned that as soon as Laville formed part of the NA/DP/I-3 government and was attached to the Ministry of TEATT, Laville managed to get the Minister of TEATT Romeo Pantophlet to grant his friends and the persons whom he promised to help with taxis and bus licenses, one of the things "his" party refused to do for him. Laville also mentioned that he wanted to get the boys off the blocks because he felt that St. Maarten youngsters must get work. Last year, the Minister of VROMI awarded Naf. 150,000.00 to Garden Boyz for them to clean drains and waterways. According to the information divulged during the signing off of the project which Laville attended, the intention back then was for the Garden Boyz to purchase weed cutters and work half a day every day so that they would have a steady income which could be as much as the minimum wage every month. SMN News learnt that instead of Garden Boyz executing the plan that was agreed upon, the Garden Boyz contracted MNO Vervat and paid them some Naf. 15,000.00 for the use of their excavator to clean the drains that were supposed to be cleaned. What happened to the rest of the money? Only Laville and Garden Boyz could tell the people of St. Maarten.

Another project Laville worked on that was highly criticized by the UP faction was TEMPO Turns 7 and $400,000.00 that was paid by the government of St. Maarten. Reporters were told by TEMPO organizers that TEMPO Turns 7 would have done St. Maarten great and the $400,000.00 would have been made back with ticket sales. Well what we found out is that TEMPO Turns 7 was a loss and government did not get back its monies. As if that was not a good lesson for Member of Parliament Romaine Laville, he approached the Minister of TEATT Romeo Pantophlet and told him he wanted $600,000.00 this year for TEMPO. SMN News learnt that when Laville was told that the Ministry no longer handles the marketing budget for Tourism, he threw a tantrum.

The United People's Party mentioned once that Joe's Construction N.V. which belongs to MP Laville's father got contracts from the harbor and he was one of the directors of the Company. Laville admitted to SMN News that he is a director of his father's company in an earlier interview because he is his father's only child. He explained back then that his name was placed as the company director ever since he was a child. When SMN News researched the information the UP faction released, we were told that Joe's Construction N.V. was not given a contract but they were sub-contracted by the main contractor and already earned over one million dollars since they began working at the Harbor Group of Companies.

On September 1st, 2012, Member of Parliament Romaine Laville approached the Minister of VROMI William Marlin and told him that he wanted a piece of land for his father, the owner of Joe's Construction N.V. where MP Romaine Laville is one of the company's directors. Laville told Marlin that he needed the land space for his father to store construction material and to build a car wash. Exactly two weeks later, MP Laville's request was honored because the Minister of VROMI William Marlin signed off on the resolution for MP Laville and Joe's Construction N.V. on September 17th, 2012 granting Joe's Construction N.V. 1200 square meters of land in the FOGA Sucker Garden. The resolution is beneath this article for viewing.

SMN News will also call on the Member of Parliament to tell the people of St. Maarten the true reason why he pulled his support from the NA/DP/I-3 coalition because it is rumoured that Laville was shown video footage by a businessman that supports the UP party. A source said that embattled Member of Parliament Patrick Illidge was also involved in the break-up because he does not want his friend and colleague in Parliament to face the same dilemma he is facing since the Bada Bing scandal broke. If any of the information that is printed in this article is incorrect then we urge the Member or Members of Parliament to come forward and to tell the true story because the National Alliance will be releasing information on what transpired during the one year they took office sometime soon.

Click here to view the resolution that was signed off by Minister of VROMI William Marlin for Joe's Construction N.V.

Click here to view the signing of Garden Boyz Contract.