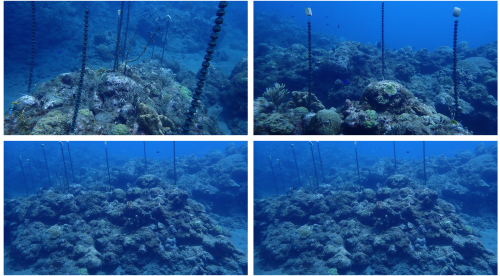 Deterioration of Caribbean coral reefs began in the 1970s when diseases devastated the most important reef-building corals in the region.  These issues were then accelerated, when the most abundant herbivore, the long-spined sea urchins (Diadema antillarum), suffered massive die-offs in the 1980s. Within days after the Diadema die-off, macroalgae started to dominate Caribbean coral reefs.  This shift from coral dominated to macroalgae-dominated reefs have had devastating effects on biodiversity and overall reef health.

The natural recovery of the long-spined sea urchin has been slow.  A new method for sea urchin restoration coined Assisted Natural Recovery (ANR), employs similar techniques as those used in terrestrial reforestation. The concept is centered around the idea that by removing barriers to natural recovery, succession can be accelerated. Earlier studies suggested that the recovery of Diadema sea urchins might be limited by a lack of suitable settlement substrate for their larvae. With the reefs overgrown with algae, a clean substrate with a fresh biofilm, which is thought to be the main cue for settlement, is lacking.

With ANR the researchers provided a new settlement substrate in the form of streamers attached to the reef.  In total, nine streamers, made up of 30 bio ball tied on fishing line, were attached to the reef.  Bio balls are normally used in aquarium filters and have a large surface area. A previous study, conducted in the same project, showed that this material is very effective to monitor sea urchin settlements. These streamers provided areas for sea urchin larvae to settle, protecting them until they grew large enough to migrate to the reef. In April 2021, six patch reefs were selected off the coast of Saba, of which 3 were provided with bio ball streamers and 3 were left untouched and served as control.

At the end of the study, it was demonstrated that reefs with bio ball streamers had significantly higher Diadema urchin recruit densities than those without, highlighting the importance of settlement substrate in natural recovery.  Unfortunately, the improved recruitment rate did not equate to a recovered population.  The recruits rarely grew larger than 20mm, suggesting that predation on recruits is also limiting natural recovery.  Once a recruit becomes larger than 5mm they outgrow the bio ball and need to move to the reef, where they are vulnerable to predation.

With the latest news of massive Diadema, die offs, park authority managers are desperately looking for ways to protect the future of sea urchin populations in the region.  The new approach of ANR might be one of the ways to assist Diadema sea urchin recovery in the future. Researchers from the RAAK PRO Diadema project are now working on the optimization of the method. However, the future recovery of this sea urchin species will mostly be dependent on the scale and lethality of a new die-off that is currently happening in the Caribbean. Already accounts of these die-offs have been recorded on Saba, St. Eustatius, St. Maarten, and Curacao.  Threatened reefs are struggling to combat the spread of macroalgae, and the continued loss of herbivores would only exacerbate these issues.

You can help authorities track sea urchin health in the Caribbean by adding your observations of healthy, sick or dead urchins by visiting the AGRRA website (https://www.agrra.org/sea-urchin-die-off/).  To read more about the latest in sea urchin recovery methods, you can find the full article on the DCBD using the link below or follow along with the RAAK PRO Diadema project online.