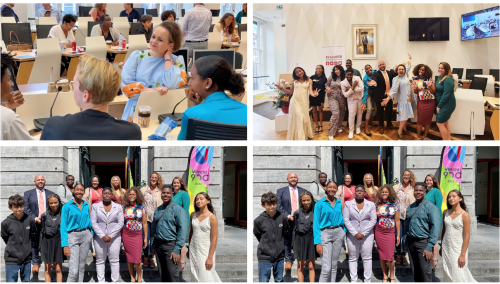 SABA/UTRECHT:--- The Saba Youth Council is on a working visit in the Netherlands and on Tuesday, July 5, the delegation went to the Utrecht City Hall to meet their colleagues of the Utrecht Youth Panel, Young Minds Utrecht, Members of the Municipal Council and State Secretary of Home Affairs and Kingdom Relations Alexandra van Huffelen.

In the company of their mothers and coaches Lauren Risley and Gerald Simmons-de Jong, the six members of the Saba Youth Council, Billie Jean Rodriguez, Jade Every, Amanda Clarke, Zakiya Lake, Vernisha Robinson, and Bernardo Baker gathered at Utrecht’s City Hall in the afternoon, eager to meet their peers from Utrecht, the Municipal Council Members, and the State Secretary.

Six members of Young Minds Utrecht Anissa, Abe, Tom, Barteld, Serge, and Adna, their coach Jennifer Lekkerkerker, and Mieke Tiwon of the Municipality Utrecht, were there to receive the Sabans, and the group went straight into a get acquainted exercise. The youngsters concluded that even though they were from different parts of the world, they shared more similarities than differences. “We talked about what we both do. We both organize events for the youth, but Saba works more with projects, while we work more with policies,” said Anissa of Young Minds Utrecht.

Split up into small groups, the youngsters brainstormed on ways how to increase youth participation.

After a tour of the City Hall, the groups gave a short presentation. The youngsters agreed that they should be taken more seriously, and genuinely listened to. “We all have the same issue, namely adults who give us false confidence, who just include us for the picture moment, to mark off checkboxes. When we speak out, for example about issues in education, people feel that it’s complaining,” said Jade. “I am the future and you need to also listen to me,” said Abe of Young Minds Utrecht.

Billie Jean, Amanda, and Vernisha gave a short speech in the Municipal Council Hall, in the presence of State Secretary Van Huffelen Council Member Stevie Jane Nolten of the BIJ1 party, and Committee Member Ruud Penders of the CDA party.

Billie Jean proposed to make the visit of Saba Youth Council and possibly the youth councils of the other islands to the Netherlands an annual tradition and to also organize a yearly inter-island debate competition. “This would be an exciting opportunity to interact more often with other youths in the regions. To sustainably achieve this dream, will require a mindset change, structural budget, and commitment. I would love the legacy of Saba’s first youth council to lead to meaningful change, diversity, and inclusion for all future Saba youth councils,” said Billie Jean.

Vernisha spoke about the issue of racism and discrimination on Saba. “This varies from the remnants of our colonial past and slave history on both a local and national level. There is a lot of systemic and institutional racism that needs more awareness. Based on the color of your skin or the last name you carry, you get special privileges or access. Sadly, this means that my access is less. This translates into home ownership, business ownership, money, and jobs. This needs to change. We need a more inclusive government on a local and national level,” said Vernisha, who also brought up the extremely high cost of living on Saba and the suffering of families because of that.

Amanda talked about diversity and inclusion on a national level from an education perspective. She said that she believed every child should have the same educational access, but that this was not easy for her because she has no Dutch passport which excludes her from studying with Dutch study financing.

“I want to be a lawyer and I would like to be accepted into Tilburg University for their International Law School program. Sadly, because I still only have my Jamaican passport, this is not an option for me. Even though I have lived on Saba for almost 10 years, and even though I grew up with all my peers, my access to higher education is not the same,” said Amanda, who will now stay another two years on Saba to finish a pre-law school program that the high school is offering her. She asked the State Secretary to seek attention to this matter and to end this discrimination.

State Secretary Van Huffelen encouraged the youngsters to stand up for what they found important and to speak their minds. She said she was happy to receive the Saba youngsters on her “home turf” Utrecht where she has been living for more than 20 years. She referred to Saba as a “beautiful place, green with luscious nature, a paradise.” But she also recognized that it was a paradise with troubles such as equal rights for everyone, as citizens of the Kingdom, and the challenges of the high cost of living.

Coach Simmons-de Jong took the lectern to personally address Jade, Vernisha, and Zakiya. “These three fabulous young high potentials have been a part of the Saba Youth Council from its inception and they are leaving us and our home Saba to study in the Netherlands. Even though it hurts my heart to watch you young amazing talent fly out into the world, I am incredibly proud of you for doing so,” said Simmons-de Jong. He thanked the three for being part of the Youth Council and for what they do for Saba. “Thank you for being such beautiful individuals. I have learned so much from you these last two years. Always remember what Saba gave you. Be strong, be proud,” said Simmons-de Jong who thanked the State Secretary and the city of Utrecht for facilitating the visit.

After the official part, there was time for mingling, whereby the State Secretary took ample time to talk with the youngsters. The State Secretary then took the Saba Youth Council to Tivoli where they received backstage tickets and went to three different concerts. “It was a very memorable night, one that I will never forget in my life,” said Zakiya.