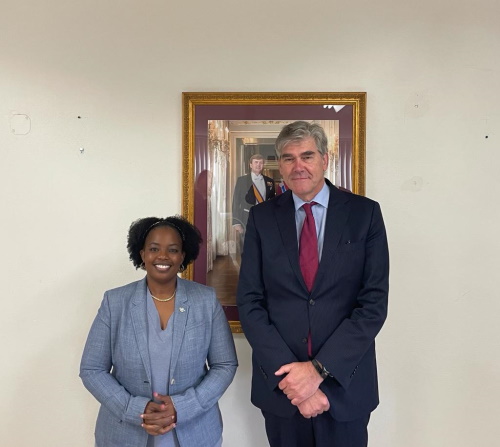 PHILIPSBURG:--- On Friday, October 22, 2021, Minister of Justice Anna E. Richardson was paid a courtesy visit by the Chief of Police of the Regional Police Unit Amsterdam Mr. Frank Paauw, who was accompanied by his support staff. The meeting took place in the context of the cooperation between the Netherlands’ National Police and the Sint Maarten Police Force (KPSM). Chief Paauw has cooperation with the police forces of the Caribbean countries of the Kingdom in his portfolio for the National Police.
Since the devastation caused to the country by hurricanes Irma and Maria in 2017, the Netherlands’ National Police has been providing its assistance to KPSM, at one point with a contingency of Dutch police officers working closely alongside Sint Maarten police officers. The Dutch police officers returned to the Netherlands in 2020. The current assistance from the National Police to KPSM is primarily focused on providing support to KPSM’s management team on a strategic level with a focus on future challenges that the organization may face and the next steps that need to be taken to prepare for these challenges. On behalf of the people of Sint Maarten, Minister Richardson thanked Chief of Police Paauw for the service of the Dutch officers, along with the KPSM officers, to the Sint Maarten community in its time of need.
While touching on the subject of community, Minister Richardson shared with Chief Paauw some of the everyday nuisances experienced by residents in the community that negatively affect the livability of many neighborhoods on Sint Maarten, such as motorcycle and scooter nuisance, school fights, noise pollution from loud music playing from cars and bars and overall disturbances that place a huge burden on residents and their surroundings. The Minister spoke of her vision to increase the number of Community Police Officers (CPOs) in Sint Maarten, who when assigned to specific areas, will be able to address the specific challenges of those areas, by applying a neighborhood-oriented approach with the support of members and organizations in the community. In addition, to the focus on the high impact crimes such as murders and robberies by law enforcement authorities, Minister Richardson believes that it is equally important for attention to be placed on the nuisances that affect the everyday lives of residents. Mr. Paauw in his response to Minister Richardson advised that the Netherlands is familiar with the concept of Community Police Officers dedicated to specific neighborhoods and that the National Police is prepared to think and work along KPSM on expanding the concept of the CPOs for Sint Maarten. Mr. Paauw will address this subject to the Board of the Chiefs of Police, so both police forces can exchange their experiences.
Chief Paauw informed Minister Richardson that the cooperation taken place between the police forces of the Kingdom – including the cooperation in the Board of the Chiefs of Police – has offered the police forces the opportunity to learn from each other and build on strengthening the concept of policing which in turn strengthens the organizations. Minister Richardson welcomed the cooperation taking place and assured Chief Paauw that she will continue with her efforts to increase and develop the skills and competencies of KPSM officers.