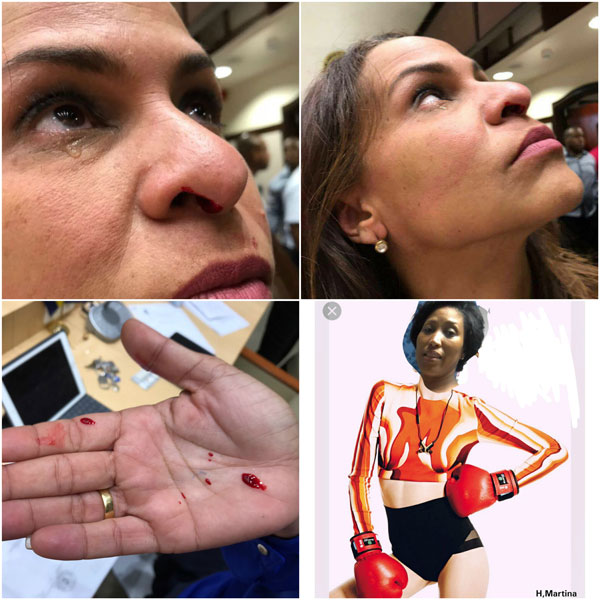 WILLEMSTAD, Curacao:--- The political developments in Curacao have taken a new high, on Thursday afternoon after MP Jacinta Constancia (MFK) walked up to the former Chairlady of parliament Giselle McWilliam (MAN) and dealt her a heavy blow in the face causing her to lose a tooth.
Police have since detained Constancia who told reporters that she does not know what went to her head, however, she will bear the consequences of her actions and also resign from parliament and turn her seat over to the party on which she was elected.
All of the hype that led to Thursday’s physical attack started since the MAN lost their majority last Sunday and the government of Curacao requested that the government of Curacao dissolve the parliament of Curacao and call for new elections that are scheduled for April 28th.

According to information provided SMN News, this is not the first time Constancia got involved with police that she even has an ongoing criminal case. Constancia was imprisoned in 2015 she was charged with embezzlement, money laundering, forgery, and swindling. The case brought against Constancia was about the purchase of mouth masks which were not delivered.  The case is known as the Dubnium case where NAF. 365,000.00 was paid for the surgical masks which were never delivered.Constancia was accused of swindling over Euros 150,000 (NAF 300,000.00) while she was the Minister of Health.

In a press statement, the prosecutor's office of Curacao stated that they took note of the events in the Parliament on Thursday afternoon. In response to these events, the Attorney General (PG) handed over over the case to the Landsrechereche of Curacao to investigate the criminal actions of MP Constancia.
MP  McWilliam filed a complaint against her colleague MP Constancia who slapped her during a parliament meeting. McWilliam filed a complaint of abuse and threats against Constancia. Another MP Rozendal also reported threats by Mrs. Constantia. MP  Constantia was arrested red-handed in respect assault and is currently in detention at the Landsrecherche to be heard as a suspect. The criminal investigation is ongoing. Later in the afternoon the board of MFK issued a statement stating that the party does not condone any type of physical abuse, as such, they issued a public apology to Ms. Gisella McWilliam and the people of Curacao.